Rooms, the much-lauded Enda Walsh and Galway International Arts Festival's co-production, is winging its way to New York this May.

The installation, which is a series of three short works - Room 303, A Girl’s Bedroom and Kitchen - premiered at Galway International Arts Festival between 2014 and 2016 and were presented together under the collective title of ‘Rooms’ at the Festival in July 2016. ‘A Girl’s Bedroom’ also toured to the Kennedy Center, Washington DC in 2016.

Each individual room is contained within a 5M x 5M white cube. An audience of five people is invited to step inside to explore these spaces for two minutes before the recorded audio begins and each story is told. Each lasts 15 minutes and are presented as installations in a site-specific gallery setting. They feature the voices of three of Ireland’s leading actors - Niall Buggy, Charlie Murphy and Eileen Walsh. Room 303 is set within the musty bedroom of an old seaside boarding house; A Girl’s Bedroom is set in the pink haze of a young girl’s room untouched for some time; while Kitchen is set within a long and narrow galley kitchenette. 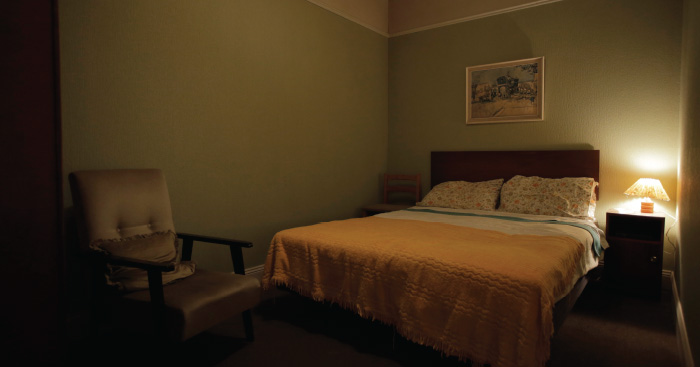 For their New York premiere, ‘Rooms’, will be presented by the Irish Arts Center on a site-specific location, a former garage, Cybert Tire, on the corner of W51st St and 11th Avenue, Manhattan, New York. The grounds form part of the future home of the new Irish Arts Center.

‘Rooms’ are designed by the Festival’s Artistic Director Paul Fahy, who has collaborated with Walsh on these works over the past three years. The creative team also includes Irish artists and theatre makers Adam Fitzsimons, Ger Sweeney, Pete Nelson and Ciara O’Reilly.

Speaking ahead of the New York permiere, Mr Fahy stated: “We are thrilled to work for the first time with the Irish Arts Center in New York to present these three works by Enda Walsh, and delighted they will run concurrently with Arlington at St. Ann's Warehouse as part of the Festival's 40th birthday celebrations. Adapting spaces and buildings has long been a trademark of the Festival and our site-specific venue 'Cybert Tire' in Manhattan, a former garage, is a very exciting prospect for the Festival to work with to create the perfect environment for these installations.”

Enda Walsh is a multi-award-winning Irish playwright and one of the foremost writers of his generation. The Guardian has called him ‘one of the most dazzling wordsmiths of contemporary theatre.’ His recent work includes ‘Lazarus’ written with David Bowie; ‘The Last Hotel’ with music by Donnacha Dennehy; ‘Arlington’ and ‘Ballyturk’ (Best Production, Irish Theatre Awards 2014). He won a Tony Award for writing the book for the musical ‘Once’ in 2012. ‘Arlington’ and ‘Ballyturk’ [Landmark Productions and Galway International Arts Festival productions] are both playing at the Abbey Theatre, Ireland’s National Theatre, Dublin in spring 2017 while ‘Arlington’ plays St. Ann’s Warehouse, New York from 3-28 May 2017.

Tickets are available on the Irish Arts Center’s website.

Galway International Arts Festival is very grateful to Culture Ireland for its support of the New York presentations of Arlington and Rooms.

The Festival would like to acknowledge its principal funding agencies, the Arts Council and Fáilte Ireland, for their longstanding support of our work and thank our Festival Leadership Partners Ulster Bank, ABSOLUT and NUI Galway.